Now that the 2019 election is over, we’re happy to share with you our voter turnout statistics!

For the 2019 Election, we had 9939 total eligible voters. Of those, 2234 voters cast a ballot, which represents 22.5% of the potential voters. We’re proud to say that our voter turnout is higher than that of last year, which had a turnout of 14.6%. We also saw an increase in the number of ballots cast, from 827 to 2234, which represents a 270% increase and gives us the highest turnout we’ve ever had!

For those who might be interested in the number of votes each candidate received, please note that our election process is designed to elect an equal cohort of Board members in order to allow them to work well together, so we do not release that information. As a general rule, we also won’t disclose which of our unsuccessful candidates received the fewest votes, since we don’t want to discourage them from running again in the future when circumstances and member interest might be different. However, as there were only 3 candidates this year, revealing that information is unavoidable.

The Elections Committee would like to thank all of our candidates for their hard work in this year’s election. With that, we are pleased to present the results of the 2019 Election.

Board turnover will formally begin on October 1. We wish the new members of the Board well with their terms.

Edit: The election is running properly again. You can cast your ballot up until the deadline given in this post.

Due to a technical error, voting in the 2019 OTW Board Election has been temporarily suspended. We expect that the election will be re-opened for voters to submit their ballots about two hours from now. We sincerely apologize for the inconvenience. This post will be edited once voting has reopened.

To assist voters, we will extend the voting time an extra 2 hours, until 2am UTC on Tuesday, August 13. (What time is that for me?) Thank you for your patience! 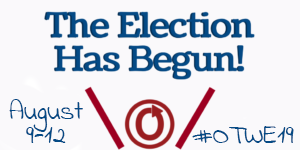 Every member who joined between July 1, 2018, and June 30, 2019, should have a ballot by now. If you didn’t get one, please check your spam folder first, then contact us via our contact form.

The election will run through August 12, 2019, 23:59 UTC; check this time zone converter to find out what time that will be for you.

Once you’ve voted, you can head over to Twitter and use the hashtag #OTWE19 to let us know!

If you used a Yahoo email address when you donated: On July 15, Yahoo purged accounts that had not been logged into within the past year. As a result, many ballots from the election that were sent to Yahoo emails bounced. If you signed up for membership with a Yahoo email address, please check that you can log into your Yahoo account and received a ballot. If you cannot log into your Yahoo account, go to the elections contact form and select “Is my membership current/Am I eligible to vote?” in order to submit an alternate email request. In the request, include your original Yahoo email address and the new one where you would like your ballot sent.

At this time, all eligible OTW members should have received an email linking to the voting instructions for 2019. The subject line was “Voting Instructions for Organization for Transformative Works (OTW) Board Election”. Please note that anyone who didn’t receive this email is not on the voter rolls this year and will not receive a ballot.

The voting instructions email contains a link to a test version of the ballot. Please follow that link to make sure that the page displays correctly and the candidates are visible. If not, please ensure you are not blocking JavaScript from ajax.googleapis.com, bootstrapcdn.com, and/or opavote.com.

The chat will be held in the Elections Discord server from 4pm-5:30pm UTC on Sunday, July 21. [What time is that for me?] Please note that though the link to the chat server is already active, chatting capabilities will not be enabled until approximately half an hour before the chats begin.

Read on to learn more about using Discord.