Now that the 2018 election is over, we’re happy to share with you our voter turnout statistics!

The Elections Committee would like to thank all of our candidates for their hard work in this year’s election. With that, we are pleased to present the results of the 2018 Election. 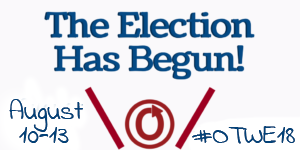 Every member who joined between July 1, 2017, and June 30, 2018, should have a ballot by now. If you didn’t get one, please check your spam folder first, then contact us via our contact form.

The election will run through August 13, 2018, 23:59 UTC; check this time zone converter to find out what time that will be for you.

Once you’ve voted, you can head over to Twitter and use the hashtag #OTWE18 to let us know!

Hi everyone, and welcome to our final Candidate Chat of 2018!

Once again you’ll have the opportunity to speak with all 4 Candidates: Michelle Schroeder, Natalia Gruber, Lex de Leon, and C. Ryan Smith.

My name is briar_pipe, and I’ll be hosting the candidate side today. On the audience/open_chat side, your host will be my fellow Elections Committee member Jenny.

END_OF_DOCUMENT_TOKEN_TO_BE_REPLACED

At this time, all eligible OTW members should have received an email linking to the voting instructions for 2018. The subject line was “Voting Instructions for Organization for Transformative Works (OTW) Board Election”. Please note that anyone who didn’t receive this email is not on the voter rolls this year and will not receive a ballot.

Hi everyone, and welcome to our First Candidate Chat of 2018!

In today’s chat you’ll have the opportunity to speak with all 4 Candidates: C. Ryan Smith, Lex de Leon, Michelle Schroeder, and Natalia Gruber.

My name is briar_pipe, and I’ll be hosting the candidate side today. On the audience /open_chat side, your host will be Judy. We’re both members of the Elections Committee.