Now that the 2017 Election is over and the results are final, we’re happy to share with you our voter turnout statistics!

For the 2017 Election, we had 5376 total eligible voters. Of those, 682 voters cast a ballot, which represents 12.7% of the potential voters. Our voter turnout is somewhat less than that of last year, which had a turnout of 15.1%. We also saw a decrease in the number of ballots cast, from 951 to 682, which represents a 28.3% decrease. The 2017 election did, however, improve in other areas: Six candidates ran for three positions, doubled from 2016, when three candidates ran for two positions on the Board.

Once again, a big thank you to everyone who participated at every stage of the election! We hope to see you at the virtual polls next year.

The Elections Committee would like to thank all of our candidates for their hard work in this year’s election. With that, we are pleased to present the results of the 2017 Election.

The following candidates (in alphabetical order) have been officially elected to the Board of Directors: 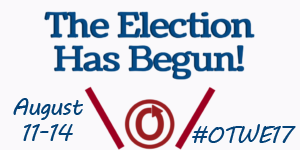 Every member who joined between July 1, 2016, and June 30, 2017, should receive a ballot shortly, if they haven’t already. If you do not receive one by 2 a.m. UTC Friday (what time is that for me?), please check your spam folder first, then contact us via our contact form.

The election will run through 11:59 p.m. UTC on Monday, Aug. 14; check this time zone converter to find out what time that will be for you. Once you’ve voted, you can head over to Twitter and use the hashtag #OTWE17 to let us know!

At this time, all eligible OTW members should have received an email linking to the voting instructions for 2017. The subject line was “Voting Instructions for Organization for Transformative Works (OTW) Board Election”. Please note that anyone who didn’t receive this email is not on the voter rolls this year and will not receive a ballot.

The Elections season is still in full swing! This post has links to the candidates’ answers to your questions.

There will be three public chats, all of which will last 90 minutes. Two of them will have three candidates in attendance, and the first chat will have all six–so each candidate will attend two chats total. Chats will take place in our public chatroom.

They are scheduled for:

During these chats, OTW members and volunteers will have the opportunity to ask the candidates questions not already covered in their platforms, bios, and Q&A, as well as to ask individual questions of specific candidates. If anyone isn’t able to ask all their questions by the end of a given chat, they’ll have an hour to submit their questions via the Elections form; Elections staffers will submit the questions to candidates either at future chats or separately to be added to the chat transcript.

We hope that you can join us for one or all of these chats!

When we posted the Board candidates’ bios and platforms, we asked the public to submit additional questions for them. Once again, our sincere thanks to everyone who did so! We have been posting groups of questions as the candidates finished them, and the process is nearly complete. For the categories that have not yet been posted, the dates they will be posted are listed in parentheses.

The following is a list of the topics covered by the questions. Clicking on a topic will take you to the tag containing all the candidates’ answers on that topic.

To navigate answers by individual candidate, please use the links below:

To read all the posts regarding Q&A, simply select the 2017 Q&A tag.

Read on to learn more about using Discord.
END_OF_DOCUMENT_TOKEN_TO_BE_REPLACED

The Organization for Transformative Works is pleased to announce the following candidates for the 2017 Election (in alphabetical order by given name):

Because we have 3 seats to be filled and 6 candidates, the 2017 election will be contested – that is, the members of OTW will vote on which candidates fill the seats.

The Elections Committee is excited to introduce the candidates to all of the members of the OTW! Included in this post are links to short Bios and Platforms written by the candidates. This post also marks the beginning of our Q&A period, during which we invite the public to submit questions for the candidates. Additionally, we will be holding a series of live chats – dates and times for those are to be announced based on candidate availability. Information on the voting period and how to vote will also be posted shortly.

In the meantime, there is a timeline of Elections events available here for your reference. Read on to learn more about our candidates and how you can submit questions for them!